After discovering the Strelleys back to 1066 I had been itching to visit their ancient land. In 2014 I was able to spend several days in Nottinghamshire and Derbyshire rediscovering Strelley territory. In honour of the blogger’s Cemetery Day, now declared 18 June, I've put together a few of the Strelley discoveries from that trip.


Who were the Strelleys? This knightly family featured prominently in the history of Nottinghamshire and Derbyshire. They hail from a place called Strelley. It's a parish about 5 miles north west of Nottingham.  Strelleys became tenants of the land around the time of the Norman Conquest. They built churches and took over monasteries all over the area. Here the relatives have built not only headstones for their mortal remains but effigies of their forefathers (and mothers).


Here are a few examples I love from All Saints Church Strelley built around 12th Century by the Strelleys.


Newstead Abbey was the home of Sir John Byron and Alice Strelley.

More recently the family moved to Derbyshire and I found these more recent graves on a visit to Saint Mary the Virgin Church in Belper. Here we discovered some of the relatives of Robert and Elizabeth Strelley nee Clayton my 4th Great Grandparents the owners of Waingroves Hall. See previous blog on Waingroves Hall.

The following were grandchildren of Robert and Elizabeth 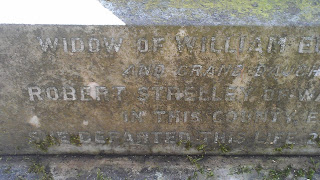 Finally a passing glimpse of the name Strelley at another family plot, 5th cousin, Greg Strelley and I discovered the very weathered grave of Elizabeth Parker 1811 - 1862. She was another granddaughter of Robert Strelley  and sister to Robert Strelley Parker and Georgina Grace Davonport.

This grave took us by surprise and in trying to work out the inscription I wondered whether Greg and I with our scraping, wetting and rubbing were doing more harm than good.

Robyn and the Genies